This series is about my trip to Honduras with Global Engineering Brigades, during which we assessed and surveyed communities to develop a gravitational water system. This series will share our day-to-day activities and  what I learned throughout the trip.

“What is a chemist pursuing marketing going to do with a group of engineers in Honduras developing a water system?”

That’s what I asked myself at the beginning of the trip.

Save for the few minutes I read about dynamics on Wikipedia and signed up for a free dynamics course on EdX.org (which I didn’t attend). I don’t have any experience in engineering. Nada.

It turns out, there’s much for to engineering than the expected technical work and calculations. For what we were going to do, I didn’t need to know the Bernoulli equation or the head loss that occurs in pipe flow, or the differences between the energy grade line and the hydraulic grade line (I still don’t really know).

Our work initially began with surveying the communities and assessing the land. What does this mean? 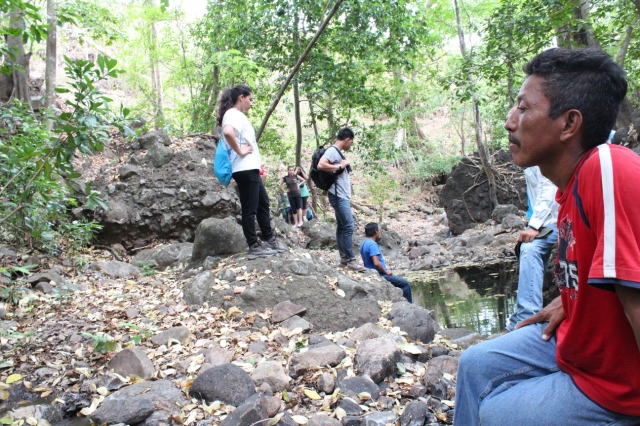 The water source at the end of a hike.

The communities we worked in have limited access to potable (drinkable) water. Community members must walk many kilometers to reach the nearest source of drinkable water. Then, guess what? They have to carry that water back to their house in 5 gallon buckets. That’s at least 40 pounds. Did I mention that on average it’s over 100 degrees Fahrenheit each day? Yeah.

In order to understand what these individuals had to do, we traveled to the water source for the communities of Los Hatillos 1, Los Hatillos 2, and Familias Unidas. A few of the community members went with us.

The women who came with us wore sandals. So boss.

One of the current water collection tanks. It served 7 houses.

Understand their struggles we did.

Then we had to determine the best method of implementing the gravitational water system. Where do we place the collection tank where the water will be treated with chlorine? What width of piping do we use? How do we prevent the pipes from exploding under pressure?

These questions went over my head, but our coordinator, Marco, did a great job explaining the process.

We returned to the community with a GPS marker, 50-meter measuring tape, markers, and branches cut into wooden stakes, and began marking the path that the pipes would follow.

We walked the road that the main 2” schedule 26 PVC piping would follow and put down markers on the road every 50-meter. While going walking down the road, we recorded at what distance down the road houses were located and determined the length of both 1½” and 1” piping that would connect to each house. 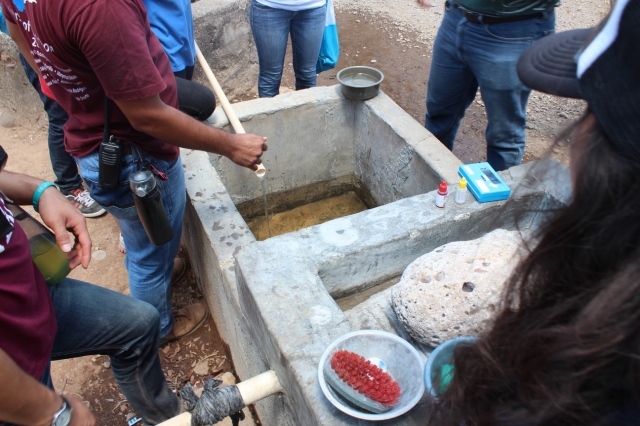 This water came from a well. It was extremely hot and contaminated with thermophilic bacteria.

Testing the water from the well. It was not treated with chlorine, contained high amounts of sulfur, and extremely basic. In other words, it wasn’t drinkable.

The initial focus was to give everyone an opportunity to work with the GPS equipment, measuring out the distances for the piping, labeling the stakes, and taking down data in a notebook. The point was to help our team develop an understanding of the pipeline design and why, although seemingly trivial, each task was important in developing an effective water system.

The next day, people had their responsibilities on lock and we moved twice as quickly than the day before. After three days, we finished marking the route of the pipeline system.

In determining the path of the piping, we covered a distance of 4.6 km and branched the route off to 159 houses which would serve about 700 people.

Although we wouldn’t be the group that would dig the trenches or lay the piping, and although there are many political factors to consider, the idea of a gravitational system was one step closer to becoming a reality.

A portion of the team taking a well-deserved break (: