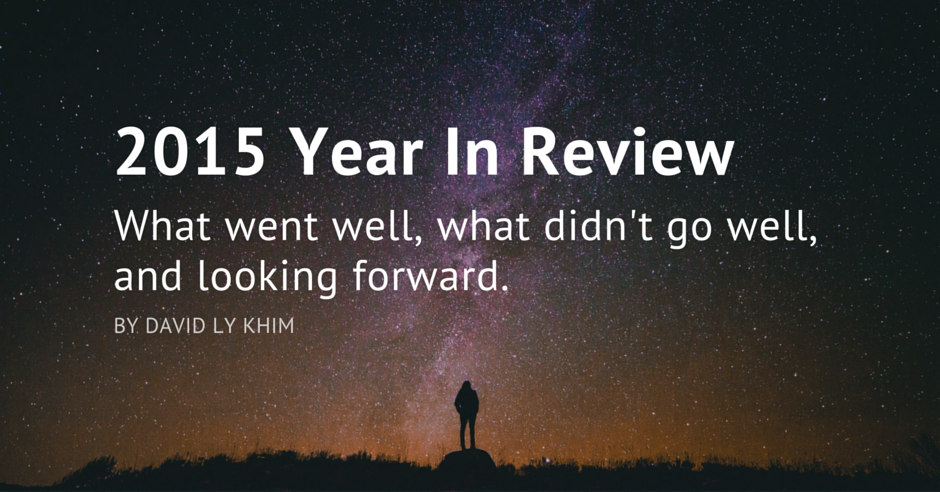 There are a few checkpoints every year that I use to gauge how far I’ve come and remind myself of how far I have to go. Now it’s time to look at this past year.

This year, I developed a bad habit. ): I would zoom into what I was doing, then immediately zoom out and ask, “What have I gotten done?” I looked for progress every day and because of that, I rarely saw any. This caused me to question some of my decisions and my future.

So I learned to zoom into my work and stay zoomed in for months at a time. Once I zoomed out, the progress was undeniable. It was a healthier mindset that allowed enough time to pass to see real progress, feel accomplished, and be energized to zoom back in and move forward.

I’ve worked to be better personally and professionally and now it’s time to zoom out and take a look at my 2015 panorama.

At first glance, it’s nice to see my progress this year compared to my 2014 yearly review, but a few things could’ve gone better.

Moved from Los Angeles to Boston.

The move was mentally and emotionally bumpy, but I’ve finally gotten settled down and prepared for the winter.  While I do miss friends and family back home, I’m comfortable saying that I’m building a life on the east coast and I have a handful of friends I can rely on.

After being let go from my first salaried job, I was ready to reach for bigger fish and applied for companies in San Francisco, Los Angeles, and Boston. I ended up receiving an offer to join the growth team at HubSpot in Boston. It has been the biggest career opportunity of my life.

The longest I had stayed at a company before HubSpot was eight months. I’ve matched that, and it looks like I’ll be at HubSpot for a while. I used to job jump because I outgrew the roles I was hired for. That’s far from the case at HubSpot.

Improved as a content marketer and developed new skills.

Back in January, I thought I knew what it meant to do content marketing. Through working with an amazing team (Anum Hussain, Scott Tousley, and Cambria Davies), I’ve developed an even better understanding of effective content marketing that drives results.

I’ve read numerous books on copywriting and advertising, brushed up on my HTML/CSS skills, taught myself JavaScript, and am currently enrolled in a web development course through General Assembly. Through work, I’ve also developed a better eye for design and a basic understanding of designing for user experience.

At one point, I was doing freelance work for three clients. It was great to have another revenue stream, learn how to work with clients, and hone my content marketing skills. It was a goal to get two clients, so I overshot that goal, but the opportunity came with its downsides.

Imagine you’re given a piece of paper with 50 circles and a pencil and you’re told to draw and make each circle into something more than that. You might draw a basketball, soccer ball, a frisbee, a donut – simple things. At some point, it’ll get difficult to come up with ideas. This is the barrier we inevitably face when solving problems.

When it comes to strenuous thinking, we naturally lose motivation as a task becomes difficult. I’ve learned to embrace and push through those mental barriers every day.

I didn’t reach my goal of reading 40 books, but this is the most books I’ve read in a year (compared to eight last year).

I used to be horrible at keeping in touch with friends and family. I’d drop off everyone’s radar for months at a time. This year, I regularly checked in with a handful of people via text and Facetime sessions once or twice a month. My relationships became stronger despite the distance.

My friends and I have also been sending each other postcards via snail mail. It’s old-fashioned and I love it. Nothing puts a smile on your face like an unexpected postcard from a loving friend to let you know they’re thinking about you.

I continued the StrongLifts 5×5 regimen, ran inconsistently, and picked up rock climbing. I injured my wrist from climbing and stayed away from heavy lifting and climbing for three months, and I compensated by running more during that time.

I cooked my meals for each week. It started out with chicken or beef with broccoli. Now it’s  a combination of baked chicken, brussels sprouts, and chickpeas. I rarely eat sweets or drink soda or juice.

I began meditating in March with the help of Headspace, moved to Calm, and eventually weaned myself away from apps. Meditation reduced my stress and helped me sleep better. Reading Happiness by Thich Nhat Hanh helped further hone my practice.

I read Meditations by Marcus Aurelius and began practicing Stoicism. While my practice may have been flawed, I learned to be more patient, to withhold judgment, to be more aware of my emotions and pick and choose which ones I feel more strongly. I wasn’t coldhearted, I chose what to not let unimportant matters affect me and put my energy into the ideas and people who matter most.

In the words of Epictetus:

“In life our first job is this, to divide and distinguish things into two categories: externals I cannot control, but the choices I make with regard to them I do control. Where will I find good and bad? In me, in my choices.”

Got my finances in order.

I became fully self-supported this year. I’ve been paying off my credit card and funneling 8% of my paycheck to my 401k (this will be 10% in 2016) and my three savings accounts: (1) emergency savings, (2) vacation, and (3) wedding. It isn’t a tremendous amount, but it’s nice to see the numbers going up every month.

Want to get better at your finances? Read I Will Teach You to Be Rich by Ramit Sethi. It’s an easy walkthrough of how to set up your finances for long-term success.

My previous partner and I tried long-distance and it didn’t work. It hurt and things have played out strangely since then, but letting go was for the best. We’re on good terms.

I also let go of a handful of friendships. Trust was broken and fucks no longer given. People come and go. What matters then is how much time you’re willing to waste thinking about those people. In my case, zero. (See Stoicism above.)

Too much junk food and alcohol.

My first few months in Boston were spent going out and partying in an attempt to make new friends. It didn’t work out too well. All I had to show for it was some gained weight. Instead of forcing myself to go out all the time, I’m letting friendships happen more organically now.

I took two dance workshops and occasionally dance on my own, but I want to spend more time dancing. It makes me happy and exercises the creative muscles differently from work.

Building a new life in a new city has been difficult.

I immediately learned that I wouldn’t find the same type of friendships I had created back home in California. Those took years and hundreds of random unplanned encounters to build. I’ll need to be more patient as my newer friendships develop.

This will come from staying up to date on industry news and technology and focusing on becoming better at my job.

I’m taking a bite out of Dharmesh Shah’s wisdom here.

In addition to working at HubSpot, I took on freelance clients, began a web development course, had a side project, and set aside time for the gym and reading. At one point, I also did work for a short-film by my cousin, curated a weekly newsletter, and wrote for other publications in my free time (if you can call it that).

While I didn’t use the b-word, I became too “busy.” Although each projectI added to my plate was justified in how it would benefit me, I didn’t have enough time for myself.

I’ve cut out a lot of things to dedicate more time to smaller personal projects, reflection, and planning.

I haven’t traveled much recently, I went on a spontaneous trip to Vancouver with Andrea David this past year and I consider it one of the best trips of my life. After hearing about her most recent trips to the Philippines and Spain, I realized that I should make traveling a higher priority.

There’s a lot to do and a lot to learn. 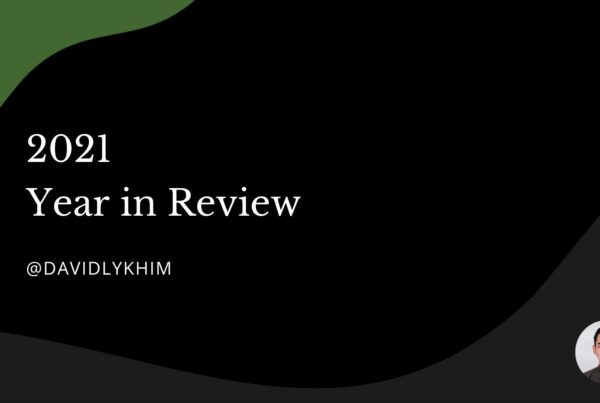 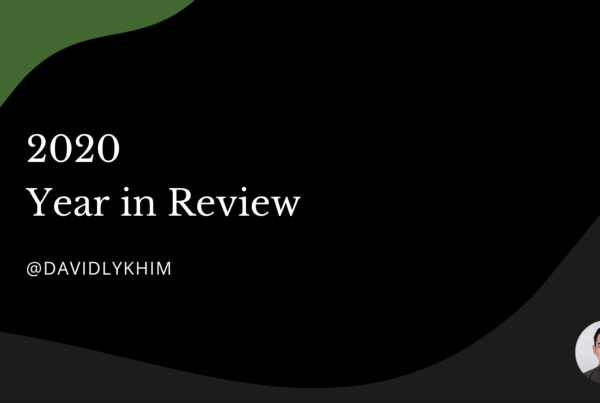 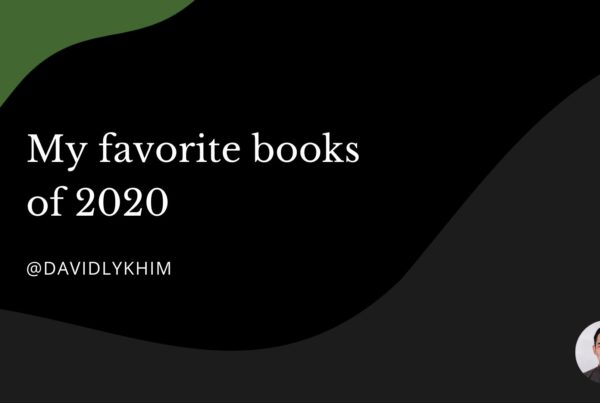